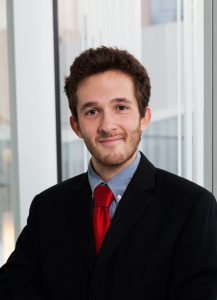 Mark Eisen is a Research Scientist in Intel Labs, Hillsboro, OR since August 2019. Dr. Eisen received the B.Sc. degree in electrical engineering from the University of Pennsylvania, Philadelphia, USA in 2014. He has since obtained his Masters in the Department of Statistics from the Wharton School and his PhD in the Department of Electrical and Systems Engineering at the University of Pennsylvania in 2019. In the summer of 2013, he was a research intern at the Institute for Mathematics and its Applications at UMN and   interned at Intel Labs during the summer of 2018. Dr. Eisen was awarded Outstanding Student Presentation at the 2014 Joint Mathematics Meeting, as well as the recipient of the 2016 Penn Outstanding Undergraduate Research Mentor Award. His research interests include the use of stochastic optimization and machine learning in the design of wireless control systems. Weiyu Huang is currently an Algorithms Engineer at Apple, developing and implementing algorithms using signal processing, machine learning, and careful data exploration. Weiyu was a graduate student at the University of Pennsylvania where he received Ph.D. degree in electrical and systems engineering and A.M. degree in statistics in 2018. From 2017 to March 2018, Weiyu was a data scientist at IQVIA, applying some of his Ph.D. research in graph signal processing and machine learning onto pharmaceutical and healthcare problems. Prior to that, Weiyu received B.Eng. (Honors) degree in Telecommunication and Electronics from the Australian National University, Australia in 2012. Weiyu was an policy officer and broadcasting engineer for The Australian Communication and Media Authority from 2011 to 2013, developing simulations and models to ensure the success of the switchover of analog to digital TV and the launch of 4G LTE in Australia.

Aryan Mokhtari is a Postdoctoral Associate in the Laboratory for Information and Decision Systems (LIDS) at the Massachusetts Institute of Technology (MIT), since January 2018.  Before joining MIT, he was a Research Fellow at the Simons Institute for the Theory of Computing at the University of California, Berkeley, for the program on “Bridging Continuous and Discrete Optimization”, from August to December 2017. Prior to that, he was a graduate student at the University of Pennsylvania (Penn) where he received his M.Sc. and Ph.D. degrees in electrical and systems engineering in 2014 and 2017, respectively, and his A.M. degree in statistics from the Wharton School in 2017. During his graduate study, he was a Research Intern with the Big-Data Machine Learning Group at Yahoo!, Sunnyvale, CA, USA, from June to August 2016. Dr. Mokhtari received his B.Sc. degree in electrical engineering from Sharif University of Technology, Tehran, Iran, in 2011. His research interests include the areas of optimization, machine learning, and data science. His current research focuses on the theory and applications of convex and non-convex optimization in large-scale machine learning and data science problems. He has received a number of awards and fellowships, including Penn’s Joseph and Rosaline Wolf Award for Best Doctoral Dissertation in electrical and systems engineering and the Simons-Berkeley Fellowship.

Alec Koppel is a Research Scientist at the U.S. Army Research Laboratory in the Computational and Information Sciences Directorate since September of 2017. He completed his Master’s degree in Statistics and Doctorate in Electrical and Systems Engineering, both at the University of Pennsylvania (Penn) in August of 2017. Before coming to Penn, he completed his Master’s degree in Systems Science and Mathematics and Bachelor’s Degree in Mathematics, both at Washington University in St. Louis (WashU), Missouri. He is a recipient of the 2016 UPenn ESE Dept. Award for Exceptional Service, an awardee of the Science, Mathematics, and Research for Transformation (SMART) Scholarship sponsored by the American Society of Engineering Education, a co-author of Best Paper Finalist at the 2017 IEEE Asilomar Conference on Signals, Systems, and Computers, and a finalist of the ARL Honorable Scientist Award 2019. His research interests are in optimization, signal processing and machine learning. More specifically, he focuses on scalable Bayesian learning, reinforcement learning, and decentralized optimization, with an emphasis on problems arising in autonomous systems.

Santiago Segarra received the B.Sc. degree in industrial engineering with highest honors (Valedictorian) from the Instituto Tecnológico de Buenos Aires (ITBA), Argentina, in 2011, the M.Sc. in electrical engineering from the University of Pennsylvania (Penn), Philadelphia, in 2014 and the Ph.D. degree in electrical and systems engineering from Penn in 2016. From September 2016 to June 2018 he was a postdoctoral research associate with the Institute for Data, Systems, and Society at the Massachusetts Institute of Technology. Since July 2018, Dr. Segarra is an Assistant Professor in the Department of Electrical and Computer Engineering at Rice University. His research interests include network theory, data analysis, machine learning, and graph signal processing. Dr. Segarra received the ITBA’s 2011 Best Undergraduate Thesis Award in industrial engineering, the 2011 Outstanding Graduate Award granted by the National Academy of Engineering of Argentina, the 2017 Penn’s Joseph and Rosaline Wolf Award for Best Doctoral Dissertation in electrical and systems engineering as well as four best conference paper awards.

Ceyhun Eksin is an Assistant Professor in the Industrial and Systems Engineering Department at Texas A&M University. He received his Ph.D. in electrical and systems engineering from the University of Pennsylvania and M.Sc. in statistics from Wharton both in 2015, and was subsequently a Postdoctoral Fellow at the Georgia Institute of Technology affiliated with both the School of Electrical & Computer Engineering and the School of Biological Sciences. He also has a M.Sc. degree in industrial engineering from Boğaziçi University, Turkey in 2008, and a B.Sc. degree in control engineering from Istanbul Technical University, Turkey in 2005. His research interests are in the areas of distributed optimization, network science, game theory and control theory. His current research focuses on game theoretic modeling and optimization of multi-agent systems in biological, communication and social networks.